“What you seek is seeking you" - Rumi 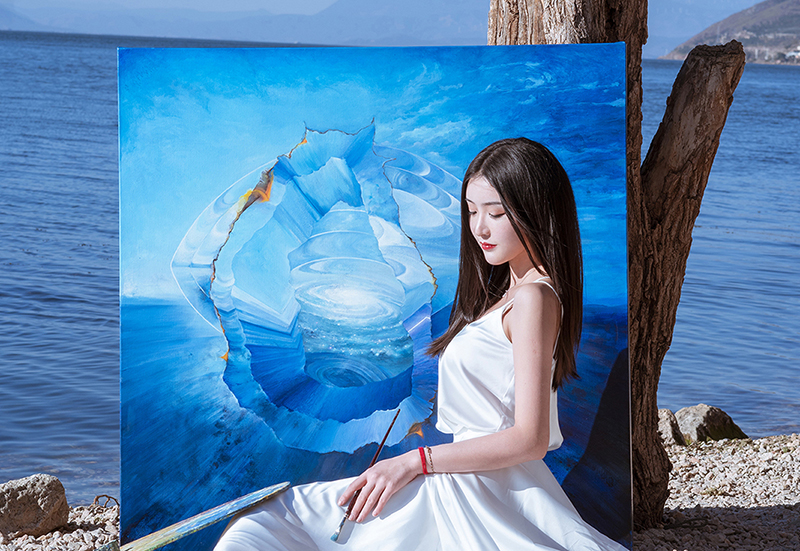 Having grown up in an art family, Siyi’s first intimate contact with painting started at the age of three years old. Since young, she has successfully studied Chinese and western painting techniques such as ink painting, sketch, watercolor, oil painting; at the same time minoring in other art subjects such as piano, dance and gymnastics. She sojourned in France since the year of 2009 and continued her art study for six years there. She graduated from University of Paris VIII in the major of Plastic Arts.

Afterwards, she travelled extensively to more than 20 countries and regions in Asia, Europe, North America and Oceania. Her early enlightenment and multiple cultivation of art, the broad aesthetic sentiments with a modern international perspective, has laid a solid foundation to this “young lady” which is going to bloom on the international art stage.
The elements frequently appearing in her works reveals that she has been inspired a lot by ancient mysticism, astronomy, religion, oriental literature, spiritual science and latest research achievements in physics. Her rich intuition in arts and an ardent desire to search for the truth had become the motivation of these creations. Influenced by oriental "Primitive Art", "Impressionism" and "Expressionism" in contemporary art, she likes to use color collisions and various techniques to express the mental and physical realms. She inclines to discuss dialectically the conceptions like “universe”, ”time and space”,” dreams”, “consciousness”, ”internal and external world” in the paintings. The tableaux are bold and splendid, which is the combination of the postures of eastern and western art. In virtue of the specific exquisiteness of female artist, strongly permeated with the inspiration and awakening of life, conveying to the audience the attention of human spiritual home and the attitude of returning to the source of life.

"Art must be derived from life, however, beyond just life. Painting is the use of two-dimensional approach for interpreting the projection of the external world. Art sometimes is a release and ascension of the soul, as a way to question to the world, to the universe also to the life. Through my works, I wish to pass a positive energy to the public. " Siyi says so.